If you’re considering to travel to Africa, chances are that you are looking to do a safari as well. African countries spark in many people wonderful images of stunning nature and lively wildlife. Indeed, safaris are perfect opportunities to create unforgettable experiences that will leave a mark on your trip which can be hard to replicate by other activities. Tanzania offers a lot of opportunities for taking a safari with the most popular choices being the Serengeti National Park and the Ngorongoro National Park. Even if Lake Manyara is a lesser-known and smaller national park than those famous destinations, having a safari in the park is a great opportunity to experience one of the most diverse parks in terms of wildlife and flora of the entire country.

With the Lake on its east and the Manyara Escarpment to its west, the Lake Manyara National Park offers breathtaking views and a large variety of habitats supporting an array of wildlife. Manyara has the largest concentration of baboons anywhere in the world and the lions here are also renowned for their tree climbing.

This article will review everything you need to know about this sometimes-forgotten national park, which offers a lot in terms of experience and uniqueness. It is an unspoiled paradise, with more than half of its surface submerged in water. The special ecosystem, the lush vegetation and the abundance of water, make this park a source of diversity unrivaled by other African national parks.

This smaller, but still very important national park is situated just between Ngorongoro and the Tarangire National park, in the northern regions of Tanzania. It is approximately 2 hours-drive south Arusha and despite the size of its neighboring parks, Lake Manyara National Park is a gem.

As already mentioned, the density of wildlife and vegetation makes the park unique. Still, several other characteristics make a visit to this national park worth it.

The park hosts different ecosystems that create such a diverse environment. From arid lands to the stunning salt lake to lush forests and lush woodlands, despite the smaller surface compared to the major African National parks, Lake Manyara has no reason for envying them. The park ranks above the Serengeti in terms of diversity, which is quite an achievement!

The extended lake which gives the park its name attracts several species of birds and creates the perfect oasis for wildlife. More than four hundred species of birds come to the park’s waters during the wet season. You’ll be able to spot plenty of flamingos, pelicans but also hippos in the shallow waters and elephants, zebras or antelopes around the shore of the lake. The most impressive view, however, might be that of hundreds of pink flamingoes in waters of the lake, contrasting with the beautiful green of the vegetation and the blue of the sky, which makes it for breath-taking scenery and great shots.

Additionally, one of the most special features of this impressive national park is made of its tree-climbing lions, a rare sight that can only be found at Lake Manyara and Queen Elizabeth National Park in Uganda. The lions climb the trees to avoid tsetse flies and other bugs, but also to enjoy the cooler breeze and get an extended view of the surroundings while spotting potential preys. Usually, tree-climbing lions tend to choose trees that are short and stout, easy to climb and quickly jump out of if needed. Take a look at tree branches, you’ll never know, you might find some lions hanging out!

Because Laka Manyara is a lesser-known safari destination, it means that the atmosphere in the park will be more quite. Forget about the lines to get to the park early in the morning, at Lake Manyara National Park, you’ll be able to fully appreciate your safari and spot plenty of animals.

Lake Manyara also is home to the only Walkway in Tanzania. While it is dangerous to leave your car (and you shouldn’t do so) at most spots in national parks, at Lake Manyara you can walk through the “Treetop Walkway”. You won’t have it guaranteed to see animals during your walk, but it is still a fantastic opportunity to get out of the car after many hours of driving and fully immerse yourself in the stunning nature around you. 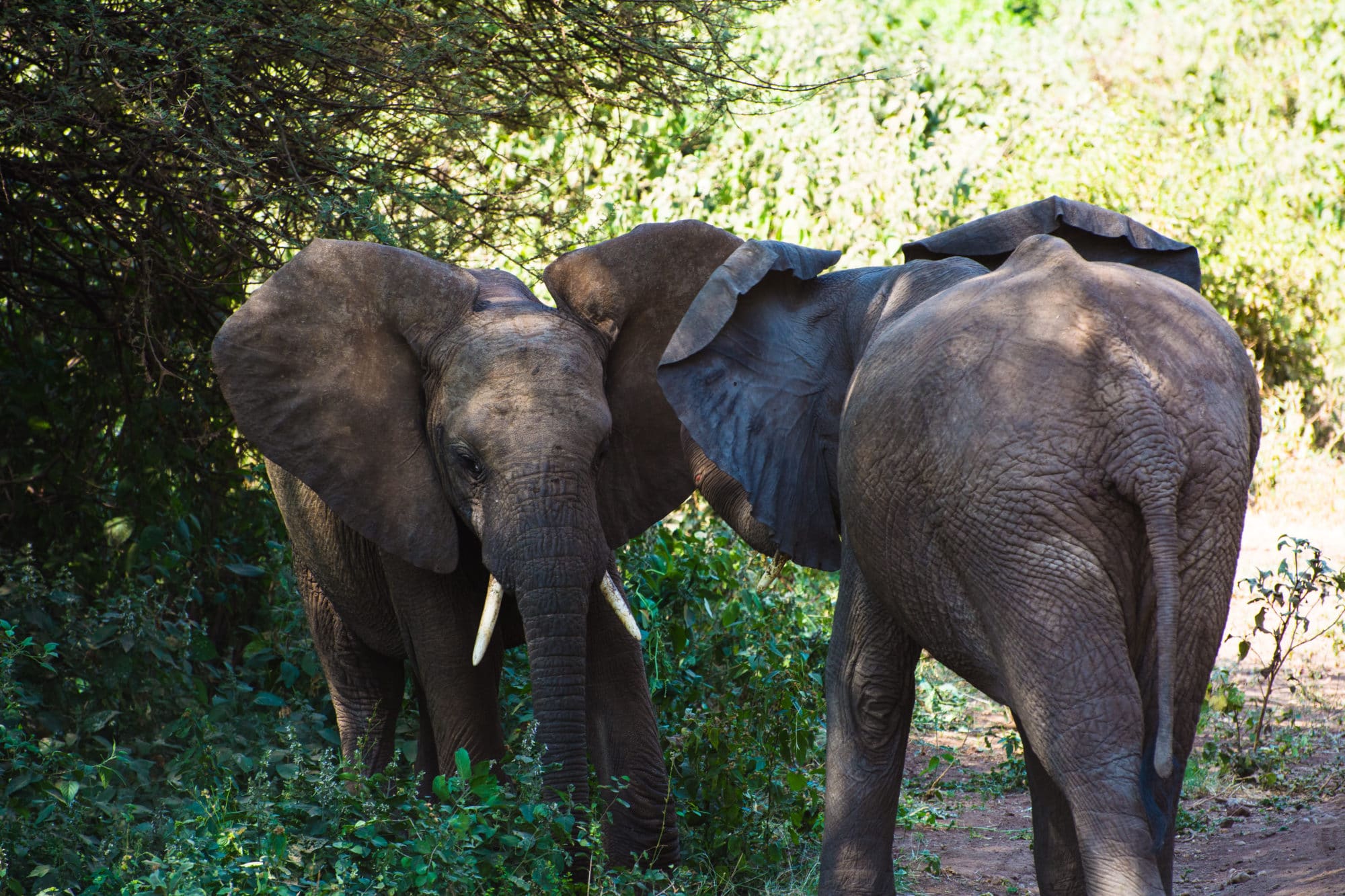 When Is The Best Time to Go to Lake Manyara National Park?

The great thing about this national park is that wildlife spotting is good all year long. However, the best season to visit Lake Manyara National park for animal spotting is during the dry season, which spans between July and October. You’ll most probably have sunny days and you’ll be able to spot animals easier thanks to the thinner vegetation. However, if you do go to the park during this period, remember to bring some warm clothes for the early mornings as they tend to be pretty cold.

If you want to see stunning landscapes and breathtaking views, however, you should visit the park during the wet season, from November to May. The vegetation is lush and it is also the best time for birdwatching.

Try to avoid to visit between March and April, as during those months it is the peak of the wet season, meaning you’ll have to be very lucky to have good weather. The wet season also coincides with the low season, meaning that the park will be particularly empty in terms of visitors and the rates will be lower.

What to Expect on a Lake Manyara National Park Safari?

There is no doubt that Lake Manyara National Parks has a unique charm surrounding it. Going there will be a guarantee of a wonderful safari experience, no matter the weather of the season. The variety, diversity, and uniqueness in terms of scenery make this park a great choice for a fantastic safari in Tanzania. You can expect to see most of the African animals, including several monkeys, elephants, lions, giraffes, cheetahs, and leopards with a bit of luck.

Getting there with a guide will help you in spotting more animals, but also to learn more about the mysteries of the wildlife inhabiting the park. For sure, visiting the Lake Manyara National Park will be an experience that you won’t forget and that will make you fall in love with the amazing wonders which nature has to offer.