If you ever had the luck to observe the spectacle of a cheetah running at full speed, you know that it is an impressive example of nature’s perfection. Cheetahs can accelerate from 0 up to 60 miles per hour in as little as 3 seconds. Not for anything, they are the fastest animal on the planet. But what makes them so fast? Keep reading to find out all you need to know about these wonderful animals.

Cheetahs are the greatest runners on the planet. The anatomy of this beautiful, slender, and elegant animal maximizes agility and velocity.

One of these felines’ most prominent characteristics is their light bodyweight, which helps them gaining speed faster. On top of that, they have small heads and long legs for getting the best out of aerodynamics’ law. Also, their flexible spine allows for extreme extension during the run. Being able to flex as much as cheetahs do, help them rotate their hips and scapula in a way that incentivizes speed.

To accelerate, only one foot at the time is in contact with the ground.

If that was not enough, cheetahs’ semi-retractable claws, contrary to big cats, never fully retract, which means they are always ready to provide powerful traction to the ground.

Other adaptations include wide nostrils, a powerful heart, and large lungs to allow more oxygen to the muscles, facilitating the sprinting.

Keep in mind that cheetahs’ anatomy is all set for sprinting. These felines can sustain high speeds for short bursts, but they take up to 30 minutes to fully recover after having chased their prey. Additionally, being built for speed comes with some drawbacks. For example, cheetahs are not as strong and aggressive as other predators in the savannah, such as lions or leopards. For this reason, cheetahs tend to flight instead of fight. 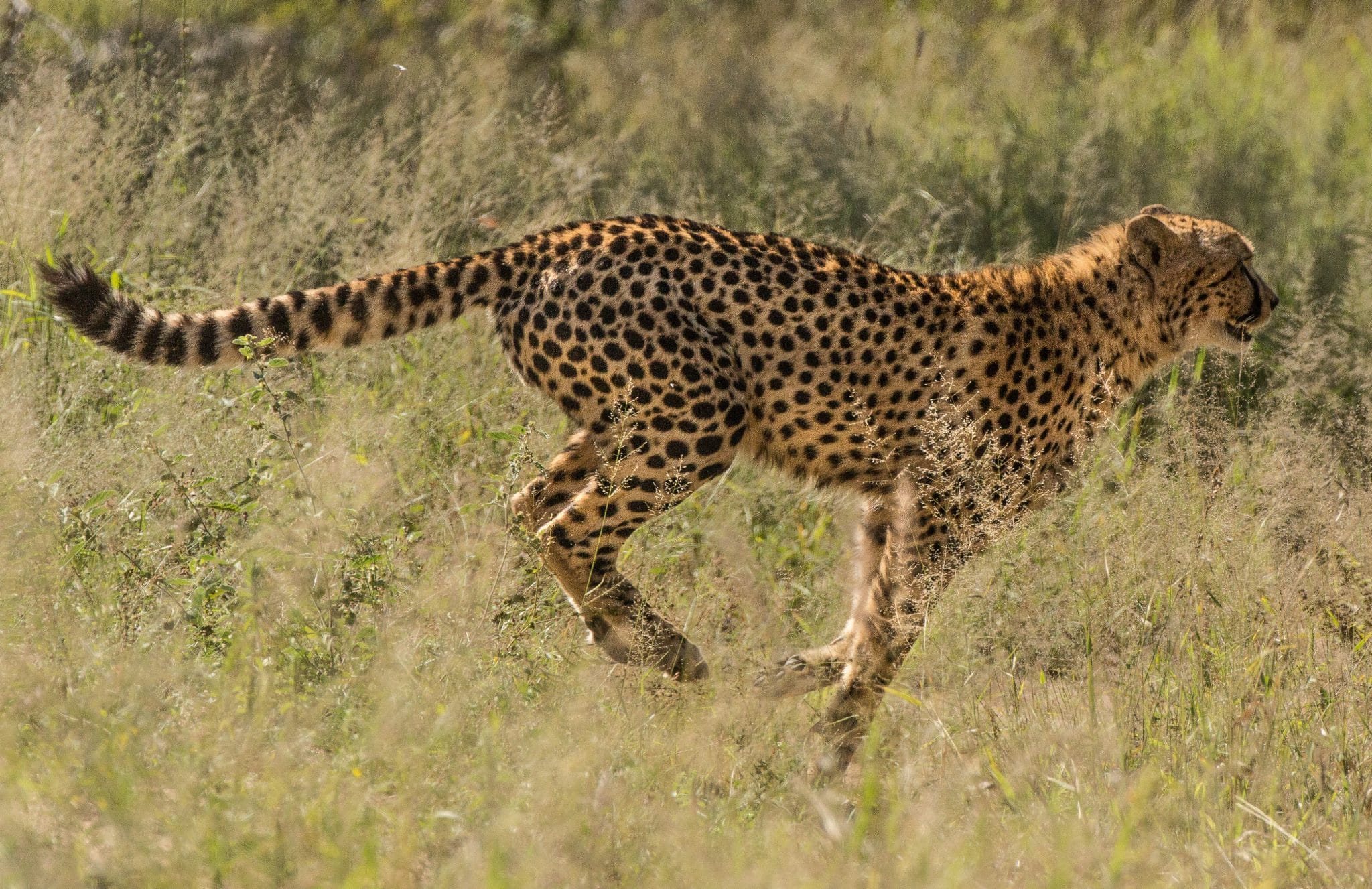 How Do Cheetahs Capture Their Prey?

Cheetahs are primarily diurnal animals, who tend to hunt in the early morning or the late afternoon. That is because they have a worse nocturnal sight as compared to other big cats hunting at night. Some of the most common prey include zebra, gazelle, and wildebeest.

The fastest cats of the savannah have their approach to hunting. To stay out of sight until the time to attack has come, they use the natural peaks of the area. Also, cheetahs love to hunt in plains covered with high grass, which allows them to hide their arrival. Once a cheetah has picked a prey, it stalks it. As cheetahs are speedy but not resistant, they need to be close to their prey before deciding to make an ambush.

When close enough, the feline uses its enormous speed and chases down the prey, which most likely will end up exhausted. As scavengers (such as hyenas) or bigger cats might be around the corner, if a cheetah successfully subdues the prey, it might start eating it before its death.

The Best Places to See Cheetahs in Eastern and Southern Africa:

Seeing a cheetah in the wild is a unique experience. But to locate them during a safari can be challenging, as their population is less abundant than before. To increase your chances to see cheetahs, you can try visiting the following national parks: