There are many beautiful places to go on safari, and one of the most spectacular sights in East Africa is the great wildebeest migration crossing the Mara River. A million and a half of these majestic animals’ travel throughout the year as they look for fresh grazing pasture and follow the rainfall for better water sources. The migration is unique in that it includes many animals and that it is a reliable path that the wildebeest take year after year. Spectators can catch a glimpse of the magnificent migration on different points of their migration route with some research and a little bit of luck.

One of the best places to observe the wildebeest migration is at the Mara River. The Mara River runs through Kenya and Tanzania and lies directly in the path of migration for multiple animals in the Masai Mara & Serengeti National Park. It is also a vital part of the river system that brings water to the region. The wildebeests’ crossing at this river is celebrated as one of the most spectacular points to observe it. The animals often cross the river multiple times during the migration, following the rainfall to get to the best grazing areas and it is a perilous crossing. The crossing itself takes a great deal of strength and agility to maneuver up and down steps or slick riverbanks and through the often heavy currents of the water. Crocodiles are looming just under the surface as well to snatch up any unsuspecting prey. Even if an individual makes it across the river in one piece, there are often lions or other predators waiting to pick off any weaker members of the group. Huge herds cross at once, and the mass of bodies and frantic scramble across the river is amazing! 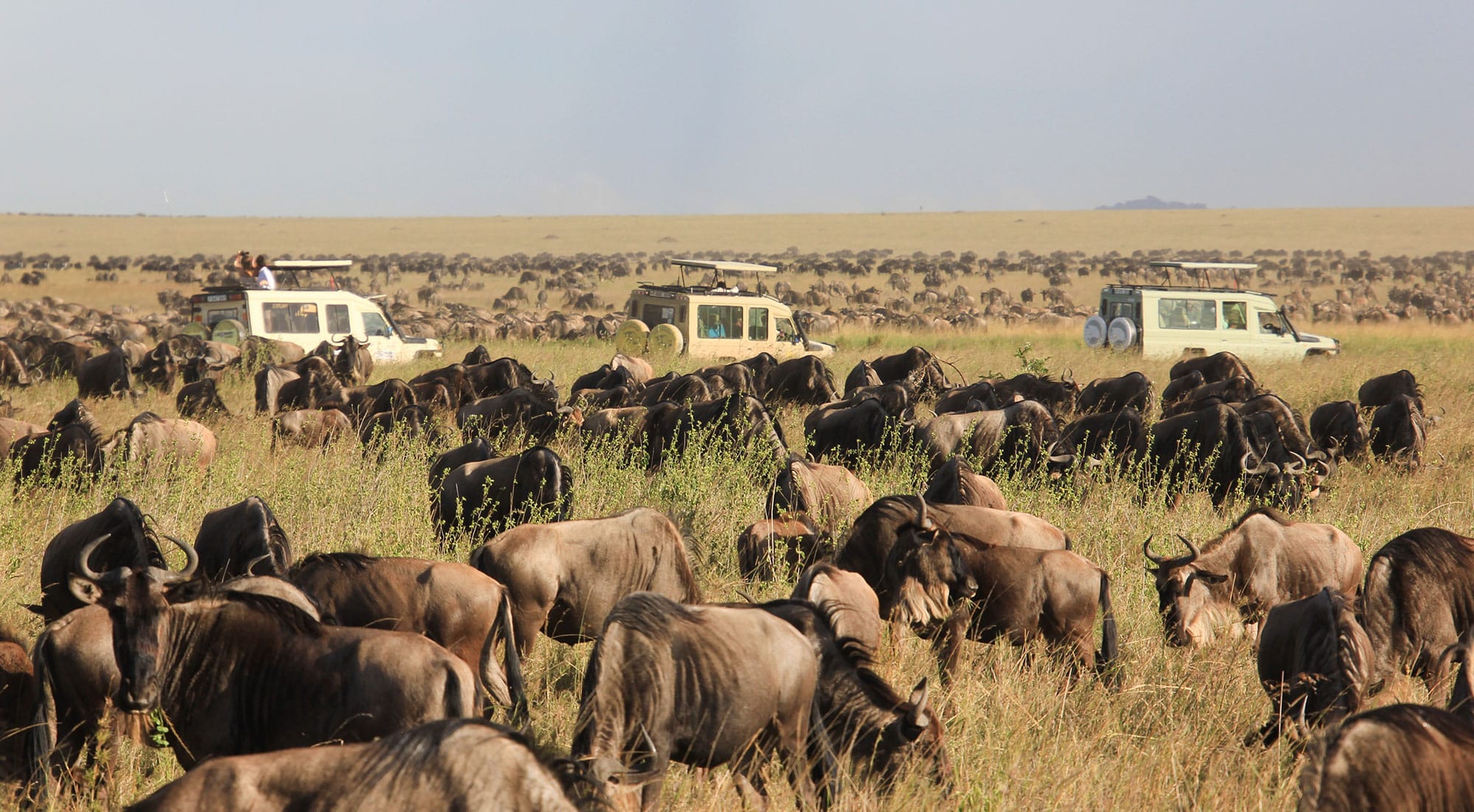 The wildebeest migrate year-round to different areas, but the dates for wildebeest migration change a bit from year to year depending on when the rainy season starts. Even though they cover a large area during their migration, the wildebeest follow a bit of a predictable path during the year, and there are multiple opportunities to see them. Generally, the migration season starts in late November or early December, just after the rains. The animals move to eat the new grass of the southeast side of the Serengeti, and then in April, they start moving north. Their trek continues northward through the summer, across the Grumeti River in Tanzania, continuing northwest through the Serengeti National Park, and crossing into Kenya into the Masai Mara National Reserve. By July or August, many of the herds have reached the Mara River for their crossing, but others will continue to cross through October. Also, just because a herd has crossed once to the north does not mean they might not cross again to the south during their migration period if the grass looks lush enough to take the risk again.

Timing your trip can be tricky because there’s no guarantee that a herd will decide to cross at a particular time. While July-September is the peak crossing time at the Mara River, relying on local knowledge of the movements of the herds can give you a better chance of seeing the river crossing when you are there as well. Every year brings slight changes to the migratory patterns of the animals, so make sure you have a knowledgeable guide for your safari. The river is exceptionally long and has many possible crossing points, both in Kenya and Tanzania. Also, take into consideration the popularity of the place you choose to try and catch a crossing. Because the wildebeest spend most of their time in Tanzania, many people recommend viewing the migration from there. If you’re looking for a quieter, more intimate trip, the Tanzania side of the river may be more appealing, but each side has its merits. If you can manage it, you might try stops at both sides of the river for a better chance at catching a good glimpse of the migration. And do not forget- it is not just the wildebeest that are crossing or congregating to take advantage of the lush ground. Zebra, hippopotamus, elephants, vulture, rhinos, lions, and many other animals are all around the Mara River as well. If every day does not bring you thousands of wildebeest, there are so many other animals to enjoy on your safari no matter which spot you choose to visit!

popular
From $2,549
Kenya Horizons Safari Tour
AdventureFamily HolidaysValueWildlife
8 Days/ 7 Nights
Share on social networks
previous
What Makes Cheetahs So Fast?
next
How to Plan a Group Tour to Africa