Offering captivating scenic vistas, pristine wildlife, excellent acclimatization opportunities and the lowest traffic of other climbers, Lemosho is our most recommended route to reach the roof of Africa. 6,7, and 8-day programs are available.

Choosing Machame route for your Kilimanjaro hike means smooth acclimatization and amazing views. This option is the second in popularity among the climbers, and the number of other climbers may be high. We have 6 and 7-day Mt Kilimanjaro hike tours by Machame.

Marangu is the most popular route for Mt Kilimanjaro hiking. Medium acclimatization transition. Ascent and descent is by the same trail. Recommended for climbers with high-altitude mountaineering experience. 5 and 6-day climbs available.

Rongai route is a unique way of climbing Mount Kilimanjaro. Starting at the North side of the Mount, it goes through the coniferous forest, offering fantastic views. This route provides moderate acclimatization experience and is fairly challenging overall, yet friendly for the beginners.

Umbwe route is a good test of your climbing skills. Rapid ascent on the first day with little time for acclimatization is compensated by the breathtaking panoramic vistas. 6-day adventure is open for the climbers with high-altitude mountaineering experience.

Northern Circuit route was opened for those seeking remote and long Mt Kilimanjaro hiking. The lowest traffic on the Mount. Starting at Shira Plateau, this route traverses picturesque Northern side of the Mount. Recommended for the beginners.

Have you ever dreamed of climbing Kilimanjaro? Kilimanjaro’s snow-capped peak is one of the most awe-inspiring sights in Africa. Straddling the Kenya/Tanzania border, the iconic Mount Kilimanjaro rises up to an impressive 5896 metres above sea level. It is one of the world’s highest volcanoes, the highest mountain on the African continent, and the highest free-standing mountain on earth; making it an international destination attracting trekkers and mountaineers from around the globe. Set within the Kilimanjaro National Park, Kilimanjaro emerges from the sprawling plains of Tanzania and boasts dense tropical rainforests, glacial ice fields, moorlands, and mystical moonscapes. Take on the colossal challenge of climbing this majestic mountain, explore the lush forested foothills, soak up the breathtaking views or take a wildlife safari and spot some of Africa’s diverse wildlife including: elephant, buffalo, leopard, duiker, eland, hyrax, blue monkeys and more.

The Kilimanjaro helicopter tour starts from Moshi Airport. Taking off, the pilot will point the helicopter to the East, making a flight over the city. During your flight, you will be able to see all the climbing routes to Kilimanjaro while skirting the mountain range. You will also fly overLake Chala which is the largest tectonic lake in the Kilimanjaro area. 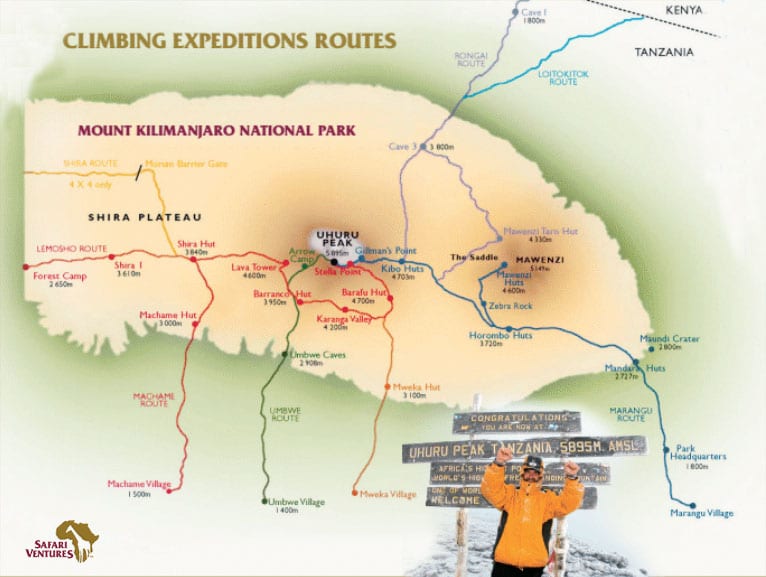