Destination
Tanzania Discover Tanzania
Departure Location
Starts at Kilimanjaro International Airport [JRO]. Arrival may be at any time. Please note that the earliest check-in at Lake Duluti Serena Hotel is 2:00 PM. Days of operation from Kilimanjaro International Airport – Friday and Sunday
Return Location
Ends at Kilimanjaro International Airport [JRO]. The earliest departure from Kilimanjaro International Airport on the last day of the safari should be after 4:00 PM.
Additional Information
Tour Number: SV0703C2020 Accommodations: Arusha Serena Hotel Resort and Spa, Lake Manyara Serena, Serengeti Serena Lodge, Ngorongoro Serena Lodge and Tarangire Sopa Lodge  Can Be Customized: Changes to accommodations, activities, and destinations can be made. Please contact us for more info.
Price includes
Price does not include
Additional Prices
Price Listed: Per person sharing Price Ranges: From $3,659 - $5,759 (See "Dates & Prices") Add-ons: Single supplement and hot air balloon activity can be added at a later date if needed- Up to 90 days from departure date. Children 7-11: Discounted rate available for children aged 7-11 years- Please contact us for more information. Children under 7: Children under 7 years of age are not permitted on scheduled safaris. However we welcome young children on private safaris- Please contact us for more information.
Itinerary PDF
Book Now 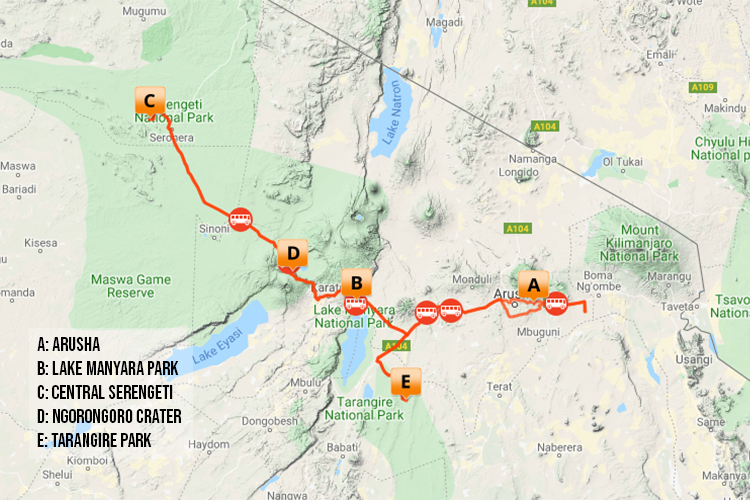 Situated in Tanzania’s central-northern region with the Lake Manyara on its east and the Manyara Escarpment to its west, the Lake Manyara National Park offers breathtaking views and a large variety of habitats supporting an array of wildlife. This small park is home to surprising biodiversity and features a magnificent landscape of acacia woodlands, water forests, baobab strewn cliffs, algae-streaked hot springs, swamps and the lake itself. The park supports 400 species of bird, and the largest concentration of baboons anywhere in the world. Other species include giraffes, zebras, wildebeest, impala, waterbuck, warthog, the Cape clawless otter, and Egyptian mongoose. Don’t miss the opportunity to see thousands of flamingos on the lake, the renowned tree-climbing lions, and large families of elephants strolling through the forest.

Situated in the heart of Tanzania, the Central Serengeti encompasses the world-famous Seronera Valley which is known for its prime wildlife-viewing opportunities. This picture-perfect landscape is characterised by endless stretches of savannah-covered open plains, interspersed by rocky outcrops of granite, scattered with acacia woodlands and covered in a network of rivers and streams. The Central Serengeti forms part of the great wildebeest and zebra migration and provides an ideal habitat for a variety of wildlife such as giraffe, impala, waterbuck, hippo, elephant, buffalo, lion, leopard, hyena, jackal, serval and much more. Popular activities include: game viewing, cultural tours, horse riding safaris, and hot air ballooning over the spectacularly scenic terrain.

Located in Northern Tanzania, the Ngorongoro Crater is best known for its natural beauty and abundance of diverse wildlife; which makes it one of Africa’s most popular safari destinations. Surrounded by Tanzania’s highlands, this UNESCO-listed crater is said to be the world’s largest intact volcanic caldera. Visitors can look forward to spotting the world-renowned Big Five and a host of other wildlife species including large herds of zebra and wildebeest. It is famed as one of Tanzania’s best tourist attractions offering visitors an array of wonderful activities including excellent bird watching, trekking, wildlife viewing, mountain biking and visiting a local Maasai village. Don’t miss the opportunity to jump on an excursion to the magnificent Olduvai Gorge.

*ADD-ON: Single supplement and hot air balloon activity can be added at a later date if needed- Up to 90 days from departure date.
*Discounted rate available for children aged 7-11 years- Please contact us for more information.
*Children under 7 years of age are not permitted on scheduled safaris. However, we welcome young children on private safaris- Please contact us for more information.