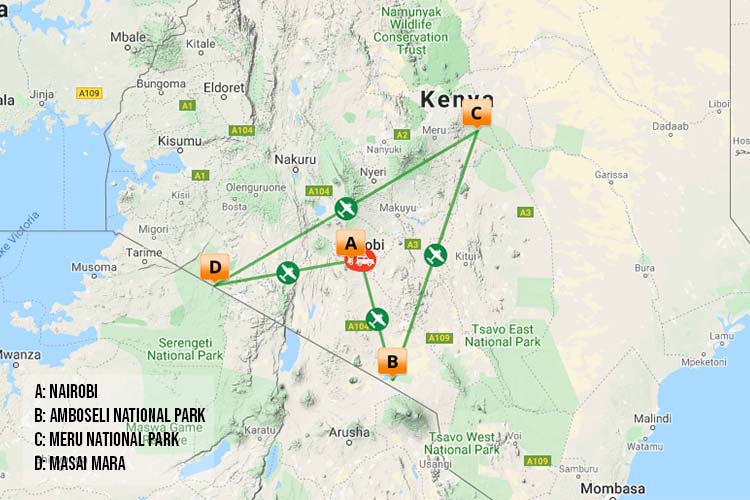 Situated in along the Nairobi River in beautiful Kenya, the capital of Nairobi is East Africa’s most cosmopolitan city. It serves as an excellent starting point for African safari trips around Kenya. Nairobi is Africa’s 4th largest city and is a vibrant and exciting place, and although it has developed a reputation which keeps tourist visits brief, there are some fascinating attractions: its cafe culture, unbridled nightlife, the National Museum, the Karen Blixen Museum and most notably just 20 minutes from the city centre wild lions and buffalo roam in the world’s only urban game reserve. Make sure you pay a visit to the elephant orphanage operated by the David Sheldrick Wildlife Trust.

Located in the southern reaches of Kenya, the Amboseli National Park is renowned for its excellent variety of wildlife such as Masaai giraffe, elephant, lion and cheetah and not surprisingly it is one of Kenya’s most popular parks. The landscape of Amboseli is dominated by the majestic snow cap of Mount Kilimanjaro, as well as open plains, acacia woodland, swamps and the massif of Ol Doinyo Orok. The birding is excellent, especially closer to the lakes and swamps. The park is famous for being the best place in Africa to get close to large herds of elephants among other wildlife species. Other attractions of the park include opportunities to meet the Maasai people and soak up spectacular views of Mount Kilimanjaro, the highest free-standing mountain in the world.

Situated east of Meru, in beautiful Kenya, Meru National Park is one of the most popular parks in Kenya. Covering over 800 square kilometres, this park is wild and beautiful featuring diverse scenery with lush swamplands, thick jungle, vast savannah, and no less than thirteen rivers. Game to view includes some of the less regularly sighted animals like oryx, lesser kudu, duiker, dik-dik and over 300 species of birds have been recorded. It is here that Else the famous lion from the book and movie ‘Born Free’ lived out the latter part of her life and is buried. Visitors can soak up the spectacular views of Mount Kenya, spot game along the Tana River and view the cascading Adamson’s Falls.

The Maasai Mara together with Tanzania’s Serengeti form Africa’s most famous wildlife park, the Maasai Mara National Reserve. The image of acacia trees dotting endless grass plains epitomises Africa for many, then add a Maasai warrior and some cattle to the picture and the conversation need go no further. The undeniable highlight of the Maasai Mara National Reserve is undoubtedly the annual wildebeest migration traversing the vast plains of the Serengeti and the Maasai Mara. It is known as the largest mass movement of land mammals on the planet – with more than a million animals following the rains. Large prides of lions, elephants, giraffes, gazelles and eland can also be spotted in the reserve. Aside from horse riding safaris and traditional vehicle safaris, hot-air ballooning over the Mara plains has become almost essential.

Resting in the magnificent Great Rift Valley and presided over by the majestic Mount Kilimanjaro, Kenya is characterized by hauntingly beautiful natural landscapes of forested hills, patchwork farms, wooded savanna and vast forests brimming with an extraordinary abundance of wildlife. The nation’s diverse range of traditional African cultures is influenced by over 70 unique ethnic groups from the Maasai, Samburu, Kikuyu, and Turkana tribes to the Arabs and Indians that settled on the coast. Add to this: an exquisite tropical coastline fringed with breathtaking golden sand beaches; gorgeous coral gardens providing excellent snorkeling and diving opportunities; and a slew of lively beach resorts, and it is easy to see why so many visitors flock here from around the world to experience a truly unique African adventure in one of the world’s most pristine safari destinations.

*Discounted rates for children under 12 years of age sharing with 1 or 2 adults (max. 2)