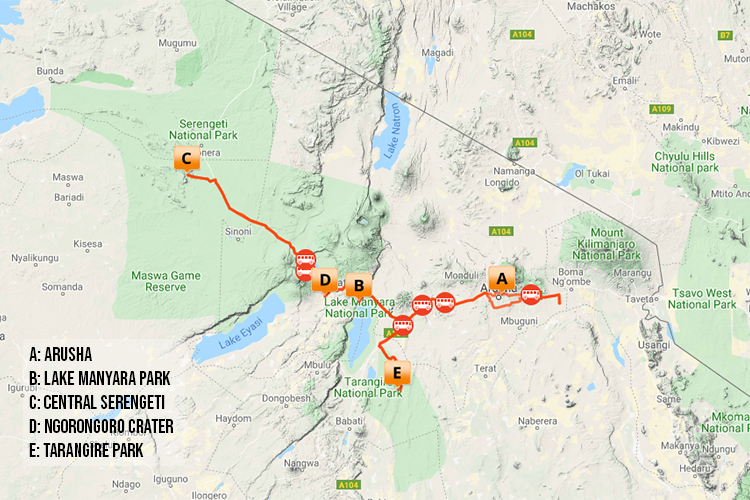 Situated in Tanzania’s central-northern region with the Lake Manyara on its east and the Manyara Escarpment to its west, the Lake Manyara National Park offers breathtaking views and a large variety of habitats supporting an array of wildlife. This small park is home to surprising biodiversity and features a magnificent landscape of acacia woodlands, water forests, baobab strewn cliffs, algae-streaked hot springs, swamps and the lake itself. The park supports 400 species of bird, and the largest concentration of baboons anywhere in the world. Other species include giraffes, zebras, wildebeest, impala, waterbuck, warthog, the Cape clawless otter, and Egyptian mongoose. Don’t miss the opportunity to see thousands of flamingos on the lake, the renowned tree-climbing lions, and large families of elephants strolling through the forest.

Situated in the heart of Tanzania, the Central Serengeti encompasses the world-famous Seronera Valley which is known for its prime wildlife-viewing opportunities. This picture-perfect landscape is characterised by endless stretches of savannah-covered open plains, interspersed by rocky outcrops of granite, scattered with acacia woodlands and covered in a network of rivers and streams. The Central Serengeti forms part of the great wildebeest and zebra migration and provides an ideal habitat for a variety of wildlife such as giraffe, impala, waterbuck, hippo, elephant, buffalo, lion, leopard, hyena, jackal, serval and much more. Popular activities include: game viewing, cultural tours, horse riding safaris, and hot air ballooning over the spectacularly scenic terrain.

Travellers heading for the Serengeti and Ngorongoro Crater will inevitably pass through the town of Karatu in the green hills of Tanzania’s northern highlands. Presided over by the towering Ol Deani Volcano, this small, colourful town serves as a popular overnight stop for visitors exploring the area’s many game parks. The town offers a variety of activities including browsing the bustling marketplace, sampling beer at a local brewery, visiting a traditional Iraqw homestead, or taking a guided walk through the Ngorongoro Forest in search of waterfalls and elephants caves. Whether you are looking for cultural tours, hiking and biking opportunities, a chance to enjoy an authentic rural Tanzania experience, or simply a break between safari game drives, this underrated town has plenty to offer.

Modern design inspired by the local Tanzanian tribes and emulating the rich coffee bean colors. All the 40 m2 rooms have their own private balcony to enjoy the beautiful lush views over Arusha City and take in the red skies of the African sunset. Equipped with a king-size bed or two single beds, 65-inch TV, minibar, free Wi-Fi and air-conditioning.

Nestled on the rim of the Great Rift Valley with amazing views over Lake Manyara, the lodge is set in lush green gardens, alive with the sounds of the many birds that frequent the property. Lake Manyara Kilimamoja Lodge is the ideal base for a visit to Lake Manyara National Park.  Sitting around the outside fireplace watching the sun setting over the Great Rift Valley and listening to the humming of the birds in the background is a wonderful way to relax before your delicious evening meal. The lodge has a dining room where international, traditional and fusion cuisine is served inside and out. A relaxing lounge, cigar bar, television room, billiards room, internet cafe and children's activity room, plus a conference room are all located in the spectacular main house. There is also a beautiful rim flow swimming pool, an outside fireplace, a boutique and a spa.

The lodge 48 suites and 2 luxury 2 bedroom villas are all air-conditioned, tastefully decorated and have panoramic views of the surrounding area. Rooms are equipped with en suite bathrooms with bath, and inside and outside showers. Room facilities include a fireplace, mini bar, safe, wi-fi and private balcony.

The Camp is tastefully decorated with all the amenities one would expect in a 5-star luxury camp. All the 20 luxury tents in each camp are en suite with flushing toilets and pressurized running showers.  There is 24-hour electric power supply.  The tents and the guest areas have been specifically designed to offer guests an optimum 180-degree view while on their bed or while enjoying their meal and drinks. They bring travellers as close to nature as possible from the covered verandas.  These stunning views embrace the sparsely spaced acacia tortillas trees with the abundance of animals in the vicinity making the experience awe-inspiring.

The evenings can be enjoyed sitting around the fireplace while exchanging the day's adventures with other guests sipping cocktails or having meals where the background music is nature's unique sounds mostly dominated by the lions roaring as if in celebration to welcome you.  The camps are conveniently located less than 40 minutes from Seronera Airstrip.  All the essential roads/routes for game drives in and around Seronera are easily accessible from the campsite.

Depart the lodge before sunrise and transfer by the balloon safari company’s vehicle (with other travelers) to the balloon staging site.  After a briefing from the pilot, the crew will inflate the envelope.  At sunrise, begin your ballooning adventure with flights at elevations to provide an overview of Serengeti National Park and a close look at the wildlife.  After about 50 minutes, land and the chase crew transfer you to a private site where a bush breakfast complete with bubbly to celebrate the successful flight in the tradition of balloonists over the centuries.  Transfer to your lodge or a mid-location where you meet your driver guide.

A 5-star colonial lodge situated on a picturesque hill with spectacular views onto Oldeani Mountain. The lodge is elevated with 360-degree views that extend all the way to Lake Eyasi and Lake Manyara. The property is set on 40 acres of pristine lush green gardens and local vegetation with over 130 species of birds.

The lodge is accessed over a pond and one's first impressions is the grand central hallway with wooden trusses looking out over the fire place, infinity pool and out onto the Mount Oldeani, which is part of the caldera of the world famous Ngorongoro crater, only 12km away!   All 50 suites have infinite views of the surrounding area.  All rooms are tastefully decorated with all the amenities one would expect in a 5-star luxury lodge, inclusive of inside and outside shower, bath-tub, air-conditioning, fire places, wi-fi, mini bar, safe, tea-coffee percolator and private deck terrace.

The latest jewel in the Wellworth Collection, Ole Serai Luxury Camp - Kuro is set in the heart of Tarangire National Park.  Offering stylish, spacious tents with a full en suite bathroom including flushing toilet and pressurised shower, guest will fell well at home.  Extensive verandahs provide guests with views of the bush, dotted with massive baobab trees and teeming with wildlife.

Evenings can be shared exchanging stories with other travelers and enjoying cocktails in the lounge or world class dining in the restaurant.  Facilities include WiFi and 24-hour electricity.

Tarangire National Park is known for large elephant herds and remarkable baobab trees.  The park is also a paradise for ornithologists featuring hundreds of unique species.  The big five can be spotted in this park and Ole Serai Luxury Camp - Kuro puts you in the perfect location to enjoy the most this park has to offer.

*ADD-ON: Single supplement and hot air balloon activity can be added at a later date if needed- Up to 90 days from departure date.
*Discounted rate available for children aged 7-11 years- Please contact us for more information.
*Children under 7 years of age are not permitted on scheduled safaris. However, we welcome young children on private safaris- Please contact us for more information.